- As reports come in overnight of yesterday's fighting, the scope of the crisis becomes apparent to Joffre.  He realizes that his armies have not suffered a temporary check, but rather a comprehensive defeat.  While the armies in Lorraine remain gripped in combat with the Germans, to the northwest the French are in retreat - indeed, this phase of the fighting comes to be known as the 'Great Retreat'.  Most precipitous has been the retreat of 5th Army after the Battle of Charleroi, and Joffre belatedly comes to the realization that Lanrezac was right and that the major German push is coming through Belgium.  Plan XVII having failed, it is discarded, and Joffre must adapt to the changing strategic situation.  He recognizes that his armies in the north will have to withdraw for a period before the Germans can be halted again.  As he states in a message sent to the War Minister at 935am:


One must face facts . . . Our army corps . . . have not shown on the battlefield those offensive qualities for which we had hoped . . . We are therefore compelled to resort to the defensive, using our fortresses and great topographical obstacles to enable us to yield as little ground as possible.  Our object must be to last out, trying to wear the enemy down, and to resume the offensive when the time comes.

In addition to adapting to the changed circumstances, the reasons for the defeat must be understood.  For Joffre, unable to find fault in himself, believes that the blame must fall on others, who have failed to do their duty.  He begins a process of purging the French army of any officer deemed to have failed in some way or another.

There is also a growing realization that the tactics of the Battle of the Frontiers must be revised.  Reports from officers on the fighting emphasize the importance of preliminary artillery bombardment, and that infantry should never be sent forward on their own, as elan cannot survive concentrated rifle, machine-gun, and artillery bombardment.

The retreat of the French armies is no mere matter of walking - there are a constant series of rearguard actions, small sharp clashes that spring up as the French try to keep the pursuing Germans from overrunning them.  In particular, river crossings become vital - even a delay of a few hours forced on the Germans can be vital for the French to stay one step ahead.

Finally, In the space between the BEF and the sea, an ad-hoc force under General Albert d'Amade is formed, consisting of General André Sordet's Cavalry Corps, exhausted from its operations in Belgium, three territorial divisions, and the garrison of Lille, which was evacuated today and declared an open city.  This was little more than a token force, to watch over the far western flank and keep German cavalry away from the redeploying French armies.

- At midnight this morning, news reaches BEF headquarters that General Lanrezac has ordered the retreat of the French 5th Army.  This retreat necessitates the retreat of the BEF as well - to remain at Mons would guarantee its envelopment and destruction.  Thus, despite successfully holding off the Germans yesterday, orders go out in the first hours after midnight for both corps to retreat.  I Corps, which had not fought, receives its orders quickly and begins the march south.  There is a delay in getting the orders to II Corps, however, with the result that its retreat has not yet begun at daybreak.  They thus have to retreat under fire, and in the ensuing confusion one battalion never gets its orders, is surrounded, and almost entirely wiped out before a few hundred can escape southwards.  As they move south, II Corps is joined by 4th Division and 19th Brigade, newly-arrived from Britain.

The news also shatters what little remains of his confidence in his French allies generally, and Lanrezac personally.  He feels that the BEF was fighting, at Lanrezac's request, to defend his flank, and then Lanrezac never informed him of his intention to retreat, leaving the BEF in a dangerous, isolated position.  The last instructions from Kitchener, which he had interpreted as emphasizing the preservation of the BEF first and foremost, rise in his mind.  Believing that the French are both defeated and abandoning his own army, Field Marshal French begins to consider ways out of the fighting.

- Since the fall of Dinant yesterday to elements of the 3rd German Army, it has been the scene of violence and bloodshed, not of soldiers, but of the civilian population.  General Hausen, commander of 3rd Army, is convinced he has seen Belgian civilians firing on his soldiers, and his soldiers are eager to teach the Belgian population a lesson.  Most of those buildings remaining after the fighting in the town are torched, and between 640 and 676 civilians are executed, the youngest only three weeks of age.

- Prince Rupprecht's 6th Army, in concert with 7th Army, and reinforced with additional artillery, launches a major attack in Lorraine, the one portion of the front where the French armies are not in retreat.  Their objective is the Trouée de Charmes, a key valley between the French fortifications at Toul and Epinal.  Seizure of this objective will allow the Germans to envelop Toul and Nancy to the north.  In the course of the day's fighting German units cross the Mortagne, the last river barrier before the gap at Charmes.  Elsewhere, General Foch's XX Corps stands its ground before Nancy.  The result is that the German success towards Charmes has exposed their flank to a counterattack from the north.  Aerial reconnaissance undertaken today reveals the deployment of the German forces, allowing General Castlenau of the French 6th Army to prepare a counterattack.

- XX Corps, for the past several days the only corps of the German 8th Army facing the Russian 2nd Army, has been executing a fighting withdrawal in the face of superior forces.  Today, Hindenburg and Ludendorff order it to stand and fight, with the intention of fixing 2nd Army in place until the other corps of 8th Army can arrive to defeat it.  Notably, the orders demonstrate that Hindenburg and Ludendorff were not yet thinking of fighting an envelopment battle - if they had, their orders would have been for XX Corps to continue to withdraw, enticing the Russians to advance into a trap.

As such, a fierce fight develops between the German XX Corps and the Russian XV Corps.  The German corps is fighting on home ground - its peacetime headquarters is only a few miles away in the village of Allenstein, and at one point in the day's fighting the corps' chief of staff finds himself directing artillery fire onto his own house.  The Russian attack, meanwhile, suffers from a lack of co-ordination.  Despite outnumbering the Germans, the corps to either side of XV Corps do not attempt to turn the flanks of the German XX Corps, allowing it to fight a frontal battle today.

Meanwhile, the glacial advance of the Russian 1st Army towards Königsberg, combined with radio intercepts of Samsonov's orders for 2nd Army, confirm Ludendorff's belief that 8th Army can be sent in its
entirety to fight the Russian 2nd Army.  Having rested on the 23rd, XVII and I Reserve Corps are ordered south, taking their place on the eastern flank of XX Corps. 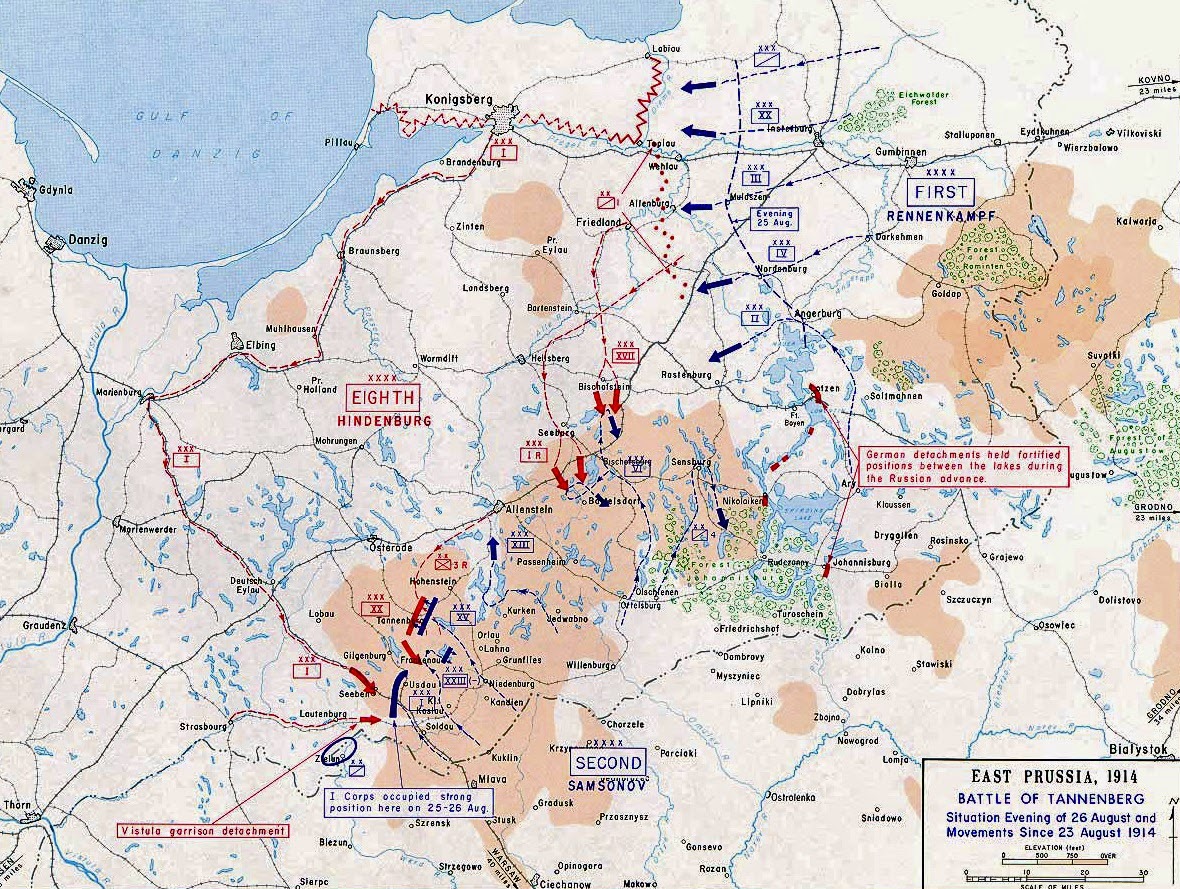 - Finally yielding to the obvious, Potiorek admits defeat and orders the remaining Austro-Hungarian forces in Serbian territory to retreat behind the Drina and Sava rivers.  5th Army has suffered the most - of 80 000 who crossed the Drina, 600 officers and 23 000 men have been lost.  Potioriek's invasion of Serbia has been a complete debacle - delays allowed the Serbs to defeat 5th and 6th Armies separately, while 2nd Army was unable to make an impact prior to its departure for Galicia.  Thus Conrad's order at the end of July for 2nd Army to be deployed against Serbia has been a complete waste of time.  Moreover, because of its use at the now-abandoned Sabac bridgehead, IV Corps of 2nd Army only today begins its transfer to Galicia.  The limited use of 2nd Army by Potiorek has accomplished nothing other than a further delay in its redeployment to face the Russians.
Posted by Wesley Ferris at 12:00 pm

Wesley Ferris
Brampton, Ontario, Canada
My life-long love of history led me into academia, completing a PhD in modern British history and spending six years as a contract university lecturer. Teaching several courses on the First World War sparked a particular interest in that conflict, the most important of the 20th-century, and inspired my current project - a day-by-day history of the Great War, recounting events precisely 100 years after they happened.